Yurii Sheliazhenko, is executive secretary of the Ukrainian Pacifist Movement, a board member of the European Bureau for Conscientious Objection and a Member of the Board of Directors of World BEYOND War.

He obtained a Master of Mediation and Conflict Management degree in 2021 and a Master of Laws degree in 2016 at KROK University. In addition to his participation in the peace movement, he is a journalist, blogger, human rights defender, and legal scholar, an author of academic publications and a lecturer on legal theory and history.

The Ukraininan government still doesn’t allow men to leave Ukraine, so he can’t come in person to the Peace march.

But he recorded a video with greetings for concerning the topic of peace and resolving conflict in Ukraine by peaceful means.

Listen to his video and to the views of this prominent Ukrainian pacifist, which are not heard in Slovakia because of the prevailing military propaganda. Below the video you will find the full transcript of the speech in English.

Transcript of the full speech in English

Dear Slovakian friends, greetings from Kyiv, capital of Ukraine, and congratulations with the International Day of Peace. All sane people in the world with moral compass in their hearts and minds support peace, human life free from violence, not the war, which is organized mass murder. Peace, not war, is universally recognized social norm and value. And now this norm is trampled and broken in my country with collateral damage to Europe and the world. I was lucky enough to survive Russian shelling of Kyiv, though February and March were nightmare, and Putin’s brutal invasion of Ukraine resulted in tens thousands of deaths, millions of refugees, ruined cities. General mood in Ukraine is to fight for victory, to have revenge, to rip Russia apart. And similar toxic mood emerged in Russia, to rip Ukraine apart, when Russian TV said that Ukrainian armed forces kill civilians in pro-Russian separatist-controlled Donetsk and Luhansk regions. But even under Russian bombardments here in Kyiv I called for peace by peaceful means, for diplomatic solution, asserting position of Ukrainian pacifists. We need ceasefire, comprehensive and inclusive peace talks to find reconciliation not only between Ukraine and Russia but also between the East and West. We are neighbors at our common home, planet Earth, and we must live as one loving, friendly family. War in my country is the most scandalous example of irrational, disruptive global fight for power between the East and West. Ruling elites in both rival camps and in both belligerent countries intend to continue war forever, because it brings undeserved glory and profits.

Military patriotic upbringing, conscription, propaganda of war and absolute trust to army, all these undemocratic things made it easy for governments in Russia and Ukraine to mobilize people for bloodshed, and by the way, instead of prohibiting conscription by international law, some hot heads are pushing for conscription in European countries, turning people into cannon fodder against their will, lying you that true democracy is only a product of meat grinder. Zelenskyy said that he is ready to fight Russia next 10 years, Putin hinted he could continue so-called special military operation 21 year as Peter the First waged Great Northern War.

Sooner or later, the war in Ukraine will be ended at the negotiation table. Better it will be not out of exhaustion, weakening and pain, but because of big democratic changes in our countries and in the world, the changes that will came when we understand that democracy and militarism are not compatible, systemic changes, transition from tyranny of warmongers to social and environmental justice. We should be better than waging wars, sacrificing our welfare to harm others, killing enemies, and destroying ourselves.

Problem is not the enemy, problem is militarization and weaponization of everything which creates fictional enemies from regular sinful people like ourselves and makes us screws in perpetual war machine, the slaves of militarist tyranny, the believers in absolute right and power of us and absolute wrong and weakness of others.

Rival ideologies of Atlanticism and Eurasianism with their fictional pseudo-reasons for eternal fight between NATO, Russia and China must be abandoned in favor of the culture of peace, knowledge and ethics of nonviolent life and governance. Total military budget of the world exceeds two trillions dollars, while regular budget of United Nations is only 3 billions, compare it, three cents for friendship and twenty euros for hidden dagger! Merchants of death from arms industry are happy that governments spend a fortune on war and measly cents on diplomacy, but peace-loving taxpayers are robbed and their life more and more in danger, with looming threat of nuclear confrontation between great powers. We must invest hundreds times more resources and efforts in peace instead of bloodshed. Arms race and economic war, multiplication of sanctions could not bring peace to Ukraine, Europe and the world. We need more voices of sanity, voices of peace-loving people reminding the governments their responsibility for building peace according to the Declaration and Programme of Action on a Culture of Peace adopted by the General Assembly of United Nations. So, thank you for your march of peace. Let’s also say “thank you” to all people around the world raising voices today for peace and justice, especially to people who are repressed for their brave antiwar protest in belligerent countries. I invite you to support the Object War campaign and sign a petition to EU at the website You Move Europe calling for protection and asylum for deserters and conscientious objectors to military service from Russia, Belarus, and Ukraine. 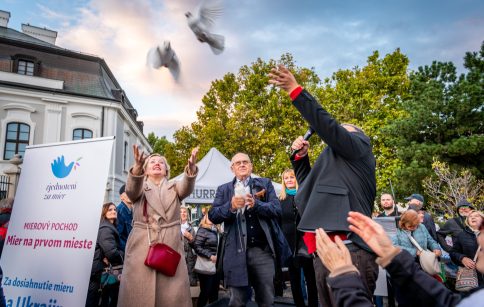 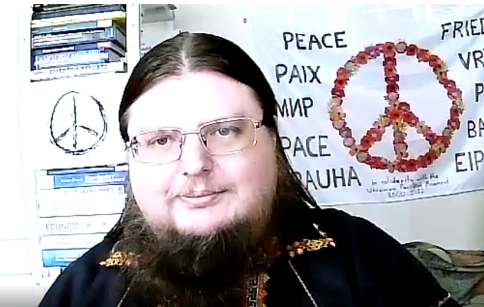 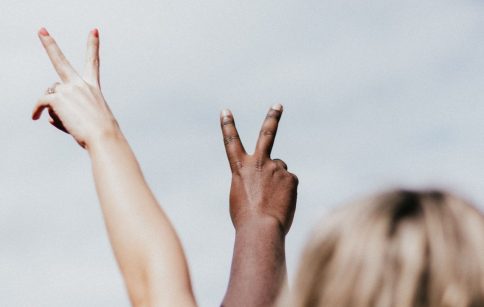